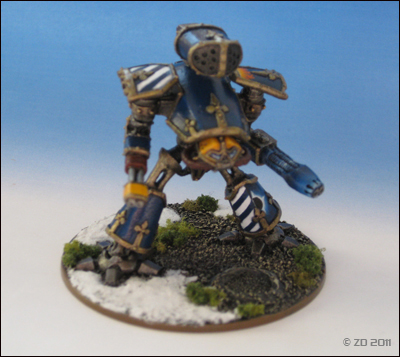 The Warp Runners battle maniple receive some new reinforcements in the shape of this fearsome Reaver. Equipped with an Apocalypse Rocket Launcher, Plasma Blastgun and Turbolaser. This weapon loadout is very much a tactical loadout that allows it adapt to whatever the battlefield throws at it. The apocalypse launcher can take care of infantry with its barage of rockets where as the plasma blastgun and Turbolaser can take on main battle tanks and other war engines. Though it will suffer when attempting to take on heavier battle Titans.

Following on from my convention of naming my Titans, I name this Reaver Inritus Cursor.

In terms of painting this, I followed the same method as I used for my Warp Runners Warlord. However, I experimented with some new techniques while painting this.

The stripped bands on the shoulder pads and leg were fairly straight forward to paint. The icon was a lot more tricky. I had it in mind to experiment with wet blending in trying to create a smooth transition of the black holes corona. It took me several attempts and a few overpaints to get the effect right, but I think I just about managed to pull it off. One thing I will say when attempting this yourself - always thin your paint!

A quick note on painting flames. I see a lot of miniatures with flame motifs, exquisitely painted, but which are upside down! Take a look at a real fire and you will see that it is brightest and most intense towards the area of combustion. Taking a typical wood fire, the flames will be white and bright yellow tapering off to deep red the further it gets from the source. A more comprehensive talk on this can be seen here.