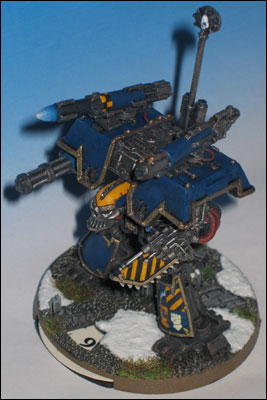 The Mk2 warlord, released during the height of 2nd edition Epic, has been much mocked with names such as "da milk float" (no I don't get it either) bandied about. Which is a shame as I consider it to be quite a cracking model. Plenty of surface detail and it is fairly easy to assemble. I'll refer to this particular type of Warlord as as a Metalicus Pattern Warlord Titan (which, in my opinion, is a much more suitable designation for this might machine).

This particular piece started out as an ebay auction which turned out to be a bargin! When I received it in the post, it was pretty banged up and partially painted as a Legio Metalica Titan. I stripped back the messy paint job and set about rebuilding it. I assembled the model but left some parts unattached to allow easier painting. I left the carapace seperate as well as each of the weapons.

But what hereldry to use? There's a few Titan Legions I like; Firebrand legion - Red and cream colours with a flaming sword motif. Warmongers legion of the Ryza homeworld but I have no idea of the legions colours or motif. Legio Ignatum "Fire Wasps" of Mars. Red and black with contrastring black and yellow chevrons. And Legio Astorum "Warp Runners" with a deep blue and gold motif. Thinking back, I remember that it was actually a Warp Runners Reaver Titan that tempted me into playing Epic back 1992 (it was the one that appeared on the cover of an ancient flyer) so I decided to go back to my roots as I was feeling all nostalgic and start a legion of Warp Runners Titans! I can always revist one of the other Legions in the future. It is a fond hope that Forgeworld eventually release some new 6mm "True Scale" Epic scale Titans to support their rumoured Adeptus Titanicus game.

One thing I like to do with my Imperial Titans is to name them and keep a record of their victories. This one is no exception, so after some research, I decided to name her Audax Lux Lucis an ancient Metalicus Pattern Titan gifted to the Warp Runners from the Metalicus forgeworld. 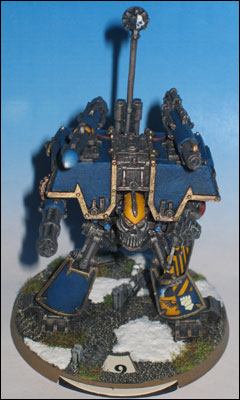 I textured the base and gave everything a black undercoat. I started off by drybrusing pretty much all the model with a mix of Vallejo Game Colour Tin, Brass and Coat D'Arms Gun Metal. This was followed up with very light drybrushes of pure Gun Metal and then Chainmail. The armour plates that would end up blue I left untouched.

The blue was started with a base mix of GW Midnight Blue and Vallejo Prussian blue (thanks to Carl Woodrow of dropship for that!) and highlighted all the way up to a mix of prussian blue and enchanted blue. The yellow was achieved with some Golden Yellow. Mythril Silver, Red Gore and an old GW colour Horizon Blue were used to help give the model detailing.

I painted a load of gems onto the front of the titan, behind the head, to give the impression of headlights. To give them a curved appearance, I followed the usual practice of painting gemstones with a final coat of gloss varnish and then used some Microscale Micro Kristal Klear to really enhance the effect. The blue armour plates were given a quick wash of Klear floor polish to brighten them up and give them a glossy sheen. The base was then finished and the whole model given a spray of matt varnish.

I just need to finish off the banner which I intend to do at a later date. All in all, I am very pleased at how this model has turned out. I hope to have done it the justice it deserves. I intend to get a few more of this pattern to form a small battlegroup, though the limitations in weapons will be a bugbear. It's a shame that the planned extra weapons GW created for this variant were only of a limited release in the US. But if I can find a collector willing to part with a weapon or two, watch this space. :)