The Imperial Guard infantry, individually they are terrible, but they always have mates. A lot of mates! Guaranteed to outnumber almost everyone, what Imperial Guard army would be complete without them? This detachment forms the start of an Imperial Guard Tactical company and a Heavy company. I've chosen 6 stands, three heavy and three tactical, to paint up. I intend these to be used primarily with any 2nd edition games I may play.

Colour scheme wise, I decided to try to follow the temperate/snow theme started with my Manticores. I started by giving them a base of Vallejo Basalt grey followed by a drybrush of Vallejo flat aluminium to give the fatigues a grey/white base to fit in with the snow theme. I then gave the shoulder pads a base in GW Orkhide shade and then highlighted with the old GW camo green and finally GW Imperial Strike Green. To finish I picked out the flesh and guns as well as gave the officer on one stand a coloured badge to help make him stand out. The base technique follows on from what I did with the manticores 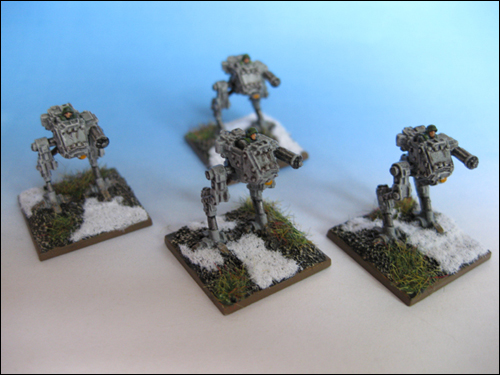 I don’t tend to use Sentinels in my game as much as I should. I more often than not use bikers or rough riders instead which is shame, because I really like the models! These followed the same method of painting that I used on the infantry, except I used a few more shades of Vallejo Model Colour greys to help define the Sentinels more. These models also feature my first experiments with weathering. I attempted to show rust and dirt streaks down the hulls to simulate the long term effect that cold snow melting on the hull may achieved. As you can see, I need to practice more!